This has absolutely nothing to do with gardening and food but my love of art. I love to draw and paint however lack of confidence gets in my way, like many people I guess. There are those of us who have always yearned to be artists in some way, a lifelong desire that gets edited out for different reasons – we doubt our ability, too many demands etc.

Last weekend I was invited to go along with a friend to visit a Marlborough artist, Pete Rickerby. Pete has kindly let me do a post about him, I found him very inspiring- but I get the impression he would be the last person to think that about himself! Pete’s a man who appears rather shy but he has a wicked sense of humour. I thoroughly enjoyed seeing his art, his beautiful garden, being shown around his home, meeting his lovely wife, the wine 🙂

Pete had not painted since high school, he had done alot of cartoons though, many published ones. When Pete was diagnosed at 54 with MS he had a hard time with it. He worked in a diving shop, rode motorbikes, lived a full life. When he became depressed he sought counselling. His counsellor asked him what was one thing he had always wanted to do, Pete knew it was to paint. So he started. 3 years later he has opened his studio and is starting to sell his art – this despite his poor hand/eye co-ordination and other issues related to his MS.

I asked him why he left it so long, if his desire to paint had always been there then why didn’t he and he replied “I never thought I could”. He just started and grew. Learning to paint has helped in some ways with his brain and thinking processes, building new neuronic pathways his specialist told him. I wanted to show his art here because it’s good 🙂 and because it shows if you feel you want to paint (write, whatever) then you should just do it because it’s within all along, it just needs us to develop it. I am also posting this because I had a conversation earlier in the week with another blogger who wishes to paint and I told her Pete’s story. She suggested I write a post (thanks Robbie 🙂 )

This is Pete and a little of his work, just click on any image to bring up gallery of larger ones.

Pete is a charming host and would welcome anyone to his studio. He can contacted at The Lunatic’s Retreat, 15 Churchill St, Blenheim, Phone 03 5777145, email p.rickerby@xnet.co.nz

I seem to have developed a preoccupation for hearts. I mentioned last month I had tried mosaics for the first time and readers asked to see them…I still have to grout the last one so hadn’t shown photos yet. We learn (I certainly do!) by trial and error, the pink one was my first ever and pieces were too far apart, The second a little better, the coloured one much better but still unfinished.

I collect heart shaped stones and rocks, they are everywhere. I decided to cover some of these for my first mosaic efforts. 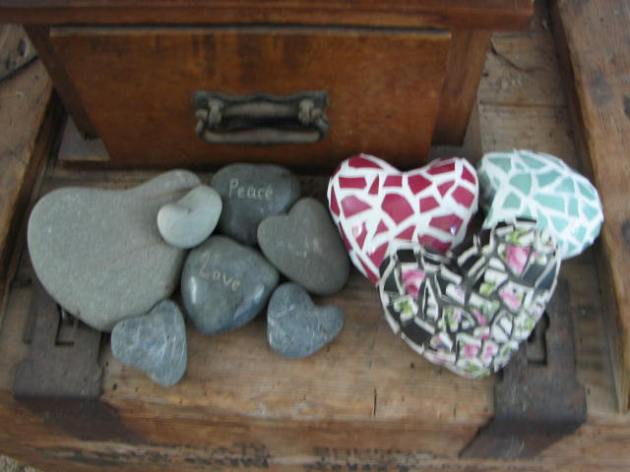 Two paintings I did for my granddaughter’s room at her Dad’s. One has yet to have to words put on. I shamefully copied these from a beautiful artist whose work is on the net and to whom I am no threat whatsoever, so I do hope she never minds! In the original the fairy is blowing bubbles and I substituted with hearts. 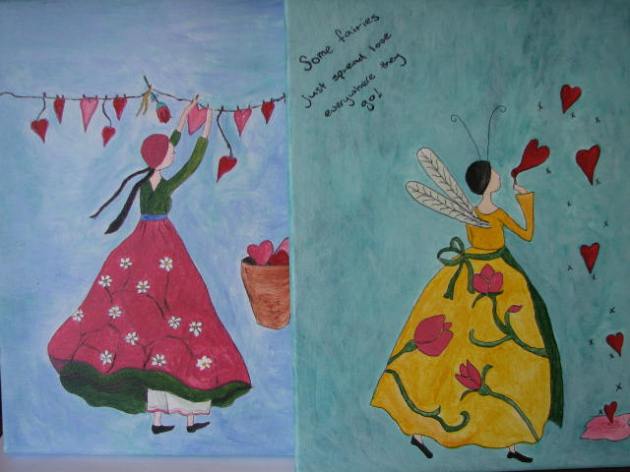 About six months ago we bought a secondhand sewing machine for $25. I can sew for haven’t for many years so have been looking at it with some anxiety about using the thing. But a couple of weeks ago I saw these pieces of fabric in a thrift shop and bought them, I had visions of a basket of homemade hearts with maybe lace and some hessian. I don’t know where this things for hearts has come from, funny how things just develop within.

My mum died a couple of months ago, when I saw this set in a shop window I decided to treat myself to something new…it took me all of ten minutes to decide to buy them lol. These 3 hearts represent my mum, dad and sister who have all passed in recent years. They are enamel with birds and roses on. 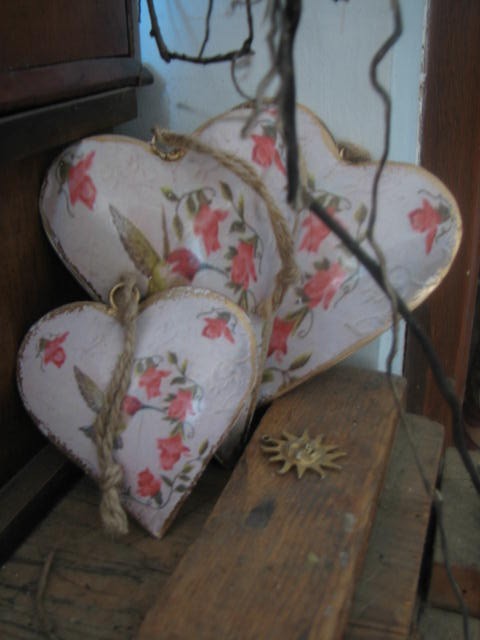 Two hearts I found at the beach on Saturday, yet to find their place. Not perfect but heart enough.

When we moved here Roger was building the new bridge down the road, he’s a concretor by trade. We had no money to spare and he felt guilty because he hadn’t got me anything for my birthday. At work that day he made me this. It was our first year together and I was very impressed by this! Few men on a building site would stop to make their wife a large heart. Apparently the comments of his workmates were to the tune of “Oh man….that’s cool dude”, and “Your missus is a pretty lucky lady, mate” with a pat on the back. 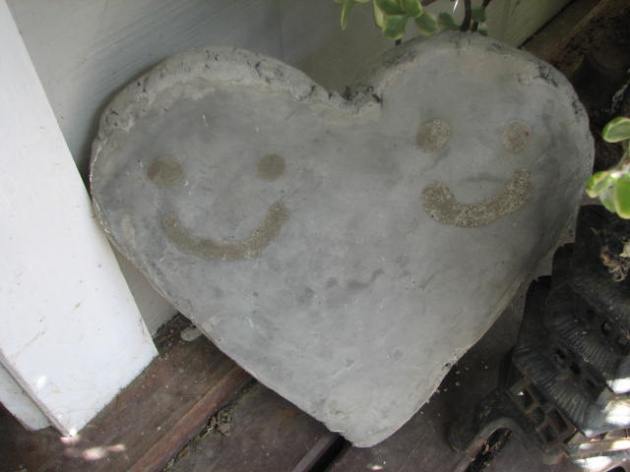 And just because I think this is pretty cool but apparently it has a hidden meaning for me only, lol, I am showing you my angel stone I found on the beach.

…this is what I have been doing today (I paint  when I can get the courage lol) These are the first paintings I have done in 17 years and have taken months to get back to – I wanted to show Linne  🙂 They still need a bit more work but getting there.

This is a picture of a vase of flowers in the lounge and I have struggled with the flowers but will keep on:

This is a picture copied off the net:

And I have been doing pictures to send my granddaughter in the mail each week, this is this weeks 🙂 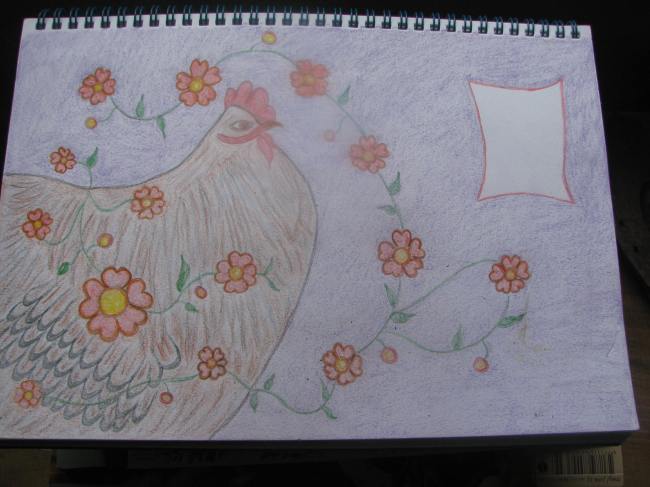