I hope you all had a great Christmas 🙂

Ours was different this year, suddenly hectic and not at all what we planned but was great.

Some of you know I started a Freecomony page on Facebook for our town earlier this year after reading a book I very much enjoyed by Mark Boyle, The Moneyless Man (here’s a post I wrote about it then). While I don’t aspire to living a moneyless life as he did I liked alot of what he had to say, in particular how the Freeconomy Community he started in his city was so successful. I like the pay-it-forward system of receiving what you need and providing what others need if you can at a later date, I like his anti-consumerism message of waste and poverty and his environmental ideals. Anyway I started this page which plodded along for months with nearly 130 people sharing, giving, receiving…but not in any big way, just quietly and slowly but I enjoyed watching people using it.

I had told a work colleague about it and she had said she would bring stuff in to me rather than take it to op shops. The last few months she had been trying to sell her house and had cleared stuff out for a garage sale, when it sold suddenly on the proviso they move out in two weeks she didn’t have time for the garage sale and asked me if I wanted the stuff for my page. Yep, I did. When I went to look at it there was 2 car loads and Roger’s truck full and I almost actually told her to ring an op shop to come and pick it up as we were so busy working and I was trying to get to the Christmas markets with my soaps. But, there were all these toys, beautiful ones….a pretty pink bike, 3 scooters, roller blades, PS 2 games, musical instruments, heaps of other toys, kids clothing and books and household stuff. It was 2 weeks before Christmas and we knew some people would not be able to afford toys so we took everything. Our lounge and dining room were full. I didn’t put them on the page but asked those who truly were struggling this year to message me with their kids sexes and ages. There were heaps who said there kids were not getting presents this year. I did our things but so did many of the other woman and it took off, 140 new people joined the page…those needing and those giving. My daughter in law came on board to help and my son, at 9 pm on Christmas Eve after putting out a plea for a donation of a PS 2 consul to go with all these games and a singstar, was given one by a lovely family who also gave a large box of wrapped presents for the family of 6 kids it was going to who had no pressies.  In the midst of this one young Mum, one of the first to reply to me privately had a fire in her kitchen that next night and spent three days in a caravan park with her 3 kids before being rehomed…we and others helped her with things. I saw so much generosity it truly made my heart sing and I had the best Christmas I have had in ages!! I have often said I never really enjoyed Christmas in the past but this year was truly special. It was great 🙂 🙂 The garden did not get done, my soaps never made it to the markets, our house was turned upside down, I had to fit everything around working but it was such a humbling and rewarding experience I have plans to do better for next year!

In contrast our Christmas Day was relaxed, very casual and we slept alot of it 🙂 The kids came for lunch or dinner but these were easy meals and we slept all afternoon. It is so hot here most Christmas Days that traditional lunches went out years ago and cold meats and salads are about as fancy as we get here. We got lots of chockies and wine and ate too much. One of my boys who is always told not to spend much (but never listens) bought us a swing seat that folds down to a double hammock….that is going to be a most well used piece of outdoor furniture!

Roger spent the 3 weeks prior to Christmas working at the local school helping to strip out and earthquake proof some of the rooms (the builders he works for were doing it). In the pile of stuff being thrown out was this large cubby hole unit, it was  painted with bright red, very ugly chipped and battered enamel paint. This was my present from him, lugged home, stripped down, sanded back and polished, I absolutely love it. 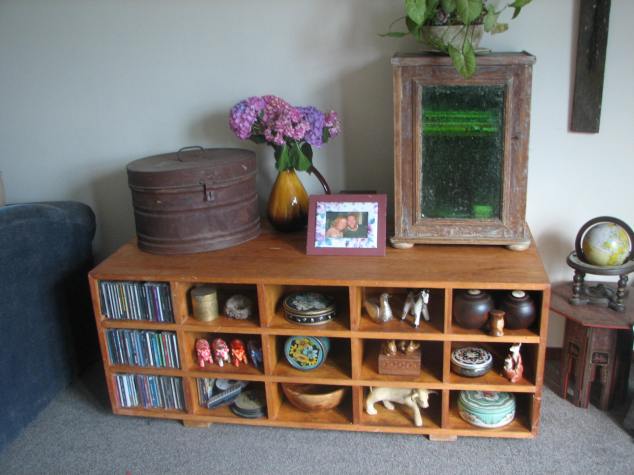 We will be spending this week catching up, yet again, on the garden! Have a happy New Year all xx

31 thoughts on “Our Freecomonomy Community at Christmas”

The Spirit & Science of Mountain Medicine

Taking out trash since forever.