Last week we inherited a cat (from one of the kids) meet 1 year old Mittens -seen here in a photo on his second day looking rather worried about one of our dogs. He has settled in nicely and has become a garden cat, he would rather play out there all day than be inside.

This week I have had my 7 year old granddaughter visiting. On her first day we went to watch sheep being shorn at the farm Roger works at. This was really interesting and we both thoroughly enjoyed it. A friend of mine is about to start classes in spinning so hopefully we can go and see her doing this at some stage as another step in the process. The second day we went to this beach to throw a message in a bottle into the water. This beach is down the back roads of our town about 10 minutes away and this is how many people generally use it – none. I take the dogs here often and am alone virtually every time. 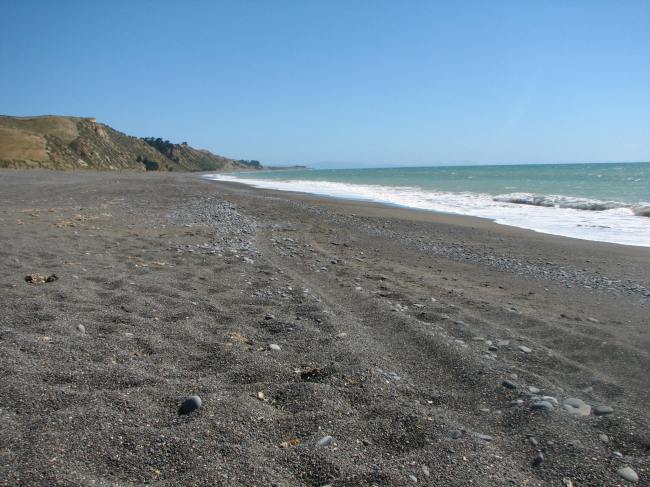 We did this last summer also, and yes, I do feel guilty because as she said “Basically we are littering aren’t we Nana?”

She wanted to do it again as last year it was found a week later 20 minutes drive from where it was thrown in and I received a text to say so. We found the tiniest glass jar we could, about 2″ high and she wrote her message, threw it in the water and it disappeared. We have a rule here, if she wants to do this we have to go along and pick up all the rubbish on the beach first as a price to pay.

This is her this morning, retrieving her message from the lady whose husband found it – in the next beach down the shore, amongst seaweed while he was looking for starfish or something. They were as excited as we were and also took photos. It was alot of fun but I don’t know my conscience can stand to do it again, I am so pleased it was found! This couple was lovely and wanted to meet her, the lady wrote a message on the back for her and popped it back in the jar. A really nice experience for all really. 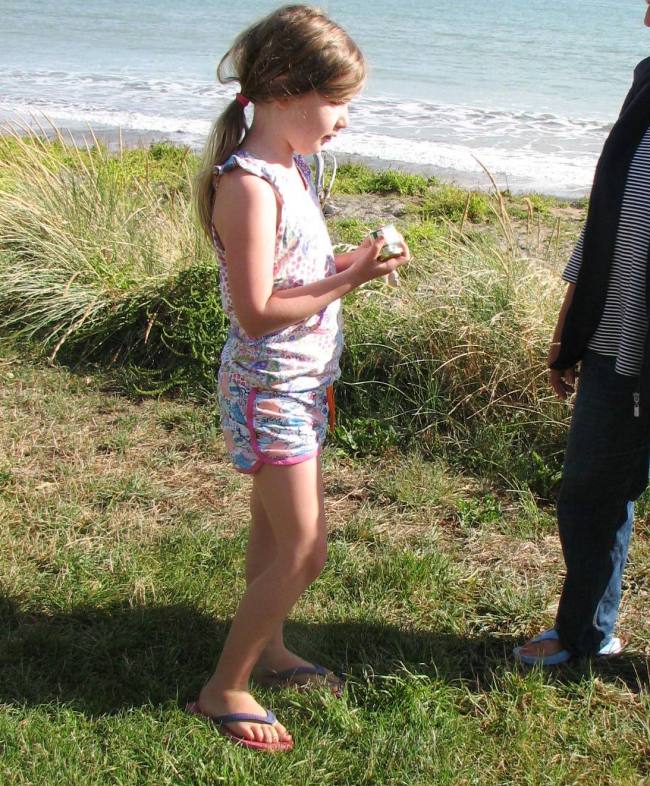 This week I have been drying vegetables for homemade soup mix to add to fresh in winter. We purchased 1.5 metres of aluminium fly screen netting to cover our oven racks. I had a misadventure with my dehydrator a few week back so it will be a wee while before it’s back in service.

These are Worcester berries we found out last year while watching River Cottage. It was supposed to be a gooseberry bush when we bought it! This is our first harvest off them and they are not so nice but apparently beautiful cooked with apples so they have been frozen for doing just that.

Last weekend Roger went garage-saleing and found these for me which I love. They are very heavy metal but I have no idea what metal they are. They were $5 for the set. 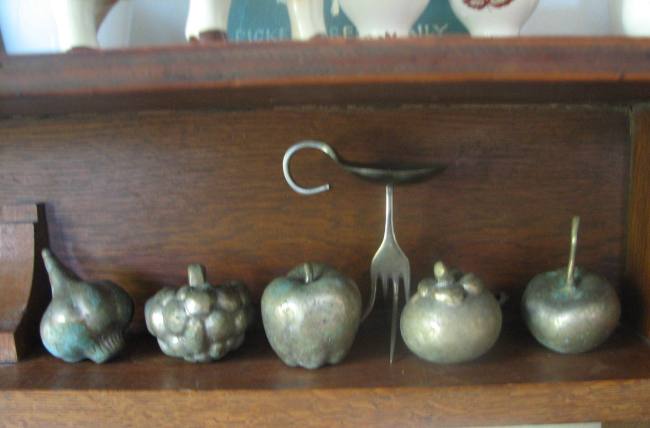 And because I don’t think I have ever shown a photo of me, this is one taken recently 🙂

This is an easy recipe to cook, takes 15 minutes and has a creamy garlic sauce.

As always, apologies for the photo quality!!

This recipe is for two meals.

Put the penne on to cook in boiling, salted water.

Saute the chopped chicken meat, bacon, garlic and mushrooms in oil till cooked and turning golden.

Pout the evaporated milk over, season with salt, pepper and parsley and simmer very gently until pasta is cooked.

Tip in pasta and spinach, and bring back to simmering. Done.

This meal generally follows a stir fry or curry for us so I can make 1 packet of chicken do two meals. I keep small packets of bacon in the freezer for use in odd meals when needed (it’s terribly expensive here!) Spinach from the garden, mushrooms are always in the fridge.

Generally our meals revolve around what’s in the garden, what’s on special…sometimes you just want something different but being on a tight budget it takes some planning – do others plan their meals like this?

This doesn’t get much easier (or economical) and is delicious. Pan-fried golden potatoes with bacon, garlic, onions….with eggs. 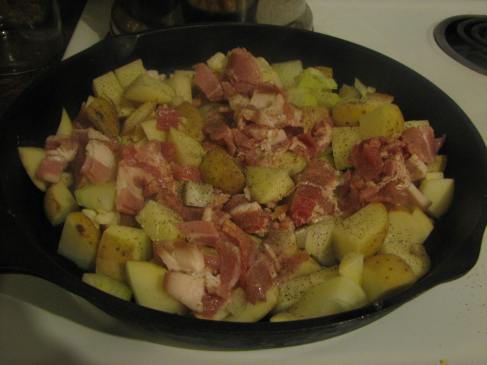 Saute on medium heat, cover with lid if possible to hasten cooking, turn once browned on the bottom. When potatoes are soft and everything is golden make 4 hollows in mix and break in the eggs. Continue cooking another 3 minutes or so until eggs are cooked but yolks are still soft. Serve with homemade tomato sauce 🙂

This is a great weekend meal and the servings here are what I use for just the two of us. It’s nice with mushrooms added, or baby spinach…tomatoes, leeks or pumpkin, lots of fresh herbs. This basic recipe can be used for a multitude of different ingredients to add flavour and variety…it’s also great accompanied by baked beans!

Low on ingredients and time yesterday I rushed this into the oven and it turned out delicious so thought I would share. Though of course it would be nice with lamb these were hoggett shanks which need a little more cooking.

5 – 6 tomatoes depending on size, chopped (or a can would do)

Place lamb shanks in bottom of a lidded roasting dish, cover with onions, mushrooms, tomatoes, garlic, and rosemary leaves. Sprinkle with salt and pepper, and drizzle some olive oil over. Cover and bake in slow oven (220 deg F) for 3 – 3 1/2 hours. These are meat coming off the bone tender and very tasty.

We had with mashed potatoes and sauteed vegetables.

Saute 4 rashers bacon, 2 large field mushrooms, 1 onion, 2 cloves of garlic until browned. Add 3 tomatoes, some fresh basil and oregano and / or a couple of tablespoons of pesto, and seasoning as desired. Simmer until all liquid has evaporated and added finely sliced spinach. Turn off heat and leave spinach to wilt with the heat that’s in pan. I left this to cool for this filling, and sprinkled with cheese once on dough.

This turned out delicious, thanks Narf 🙂

We often make half again of this amount of the filling I used and have been eating it with honeyed figs, sounds a little weird but it’s a delicious combination.

Postnote: I have since made this a few times using leftover meat or vegetable dishes, a delicious way to use up leftovers!

Last night we were going to be busy squishing a good deal of grapes so I just put soup on for tea. Hubby is not so keen on soups but will eat them, I love them….there’s something soothing about chopping all those vegetables into a large pot simmering into very nourishing comfort food….and it’s a virtually free meal when you have a garden.

Already in the pot was this amount of pumpkin again and a bag of grated, frozen zucchini. The stock was made the day before from a leg roast bone, cooled overnight, the fat removed and any meat chopped up and returned to pan. In the jars are dried leeks and lentils, I just added salt, pepper and herbs to this, simmered about 4 hours and adjusted seasonings. In most cases I find a bland soup just comes from not enough salt or it hasn’t thickened well enough from cooking down. Pumpkin and potato give the soup a thicker more substantial texture. I use what is available, at other times celery, parsnip, swedes etc will go in.

Years ago when my kids were small I kept a large container in the freezer for vegetable water, gravies and leftovers for soup and just added what was missing at cooking time (or odd veges wrinkling in the fridge!) Couldn’t be called flash food, but good, frugal, nourishing with a good bread.

A pot of soup can last up to a week on the stove being reheated each day and new things added. I remember an elderly woman telling me years ago her mother kept the same pot going all winter. !! I have frozen 2/3 of this for easy meals in the future.

Hubby found this perfect crop of large mushrooms in a paddock at work 🙂 Other years I have sauteed any extra mushrooms in better and oil and frozen with good outcome, today I  dried this lot. A friend of ours who is a chef told us at his restaurant they order in dried mushrooms and just soak in water as needed….