No one could ever call me a minimal. I buy all sorts of things I like because they are cheap, I will say though I don’t do it often…just occasional trips nowadays when I am looking for something in particular. This time I was searching for more jars and also bottles suitable for fruit liqueurs. It always happens that I see other people’s pre-loved treasures and feel I would like to love them too – or I see other people’s junk and think I could use it somehow. (I will not show you a photo of our spare room full of stuff to go back to op-shops but instead we will gloss over the fact Wendy buys stuff for which she has no use for sometimes because it was very cheap!)

Anyway, these jars cost 50c – $1 each and is the only way I will ever buy jars. I have bought whole boxes full for $1 before but these were all needed for some reason. See that lovely big bottle, it’s an old whiskey one with a screw on lid – $1!! 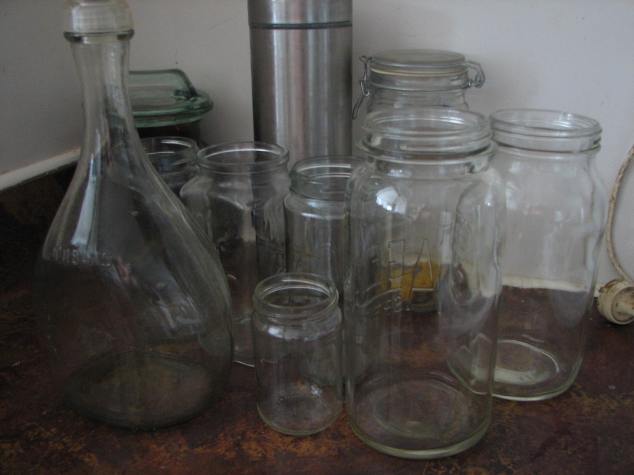 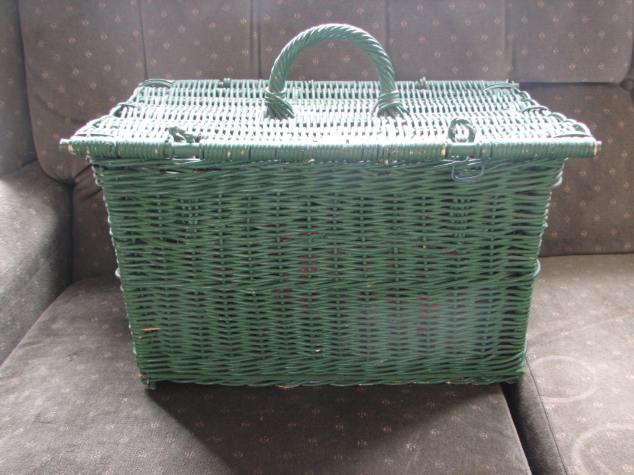 Large flour bin was $10, this will last my lifetime. 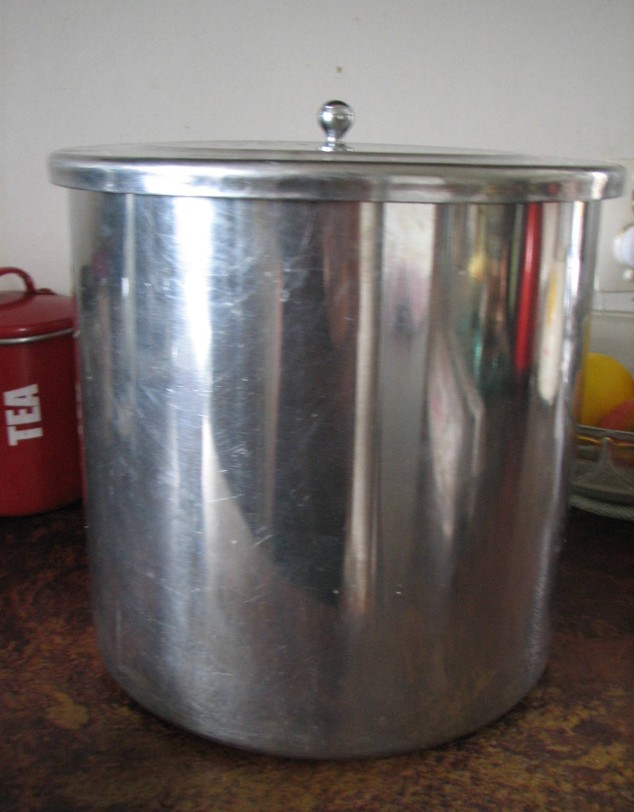 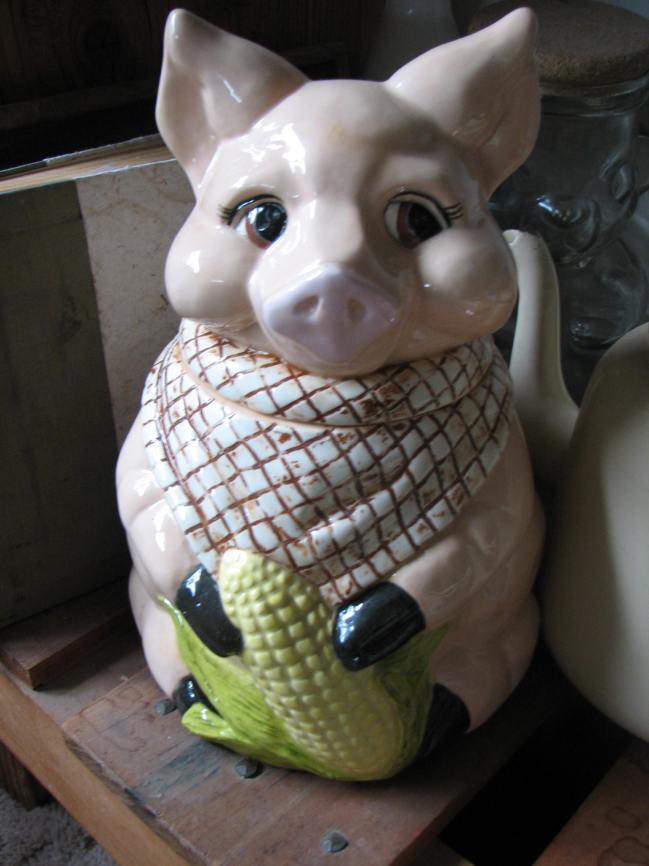 2 wooden containers for $1, I have no idea where these will go/fit! 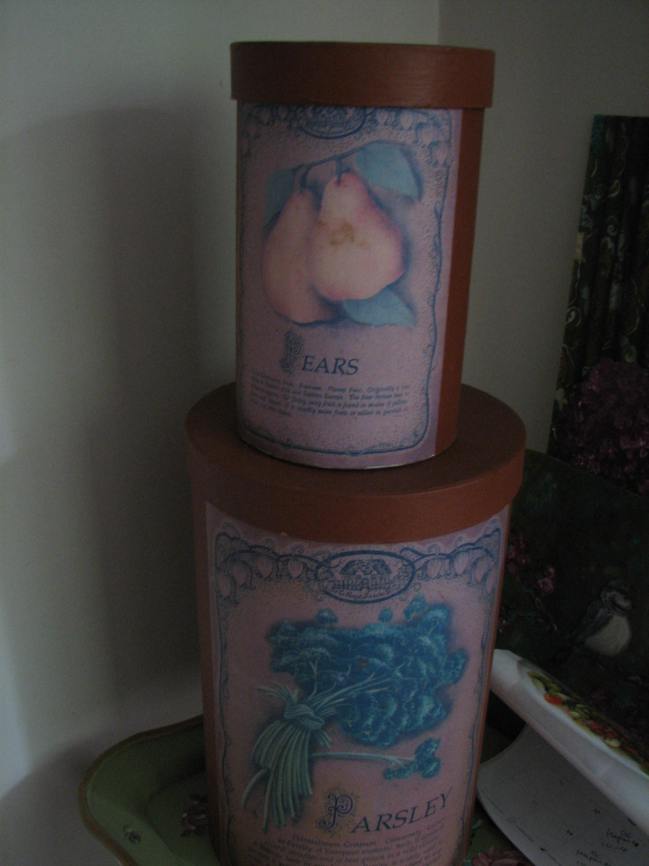 And this for $5. Now…this will be a winter project (well, that’s the plan) I have a weird thing for boxes, wee drawers etc, have them all over everywhere. This took my fancy, it’s about knee high but pretty ugly as is. What potential lies here though!! Watch this space for a beautiful decoupaged piece – or, you could see it in a future post on purging my home and a rant about all the junk I have collected and the need for it to be gone! 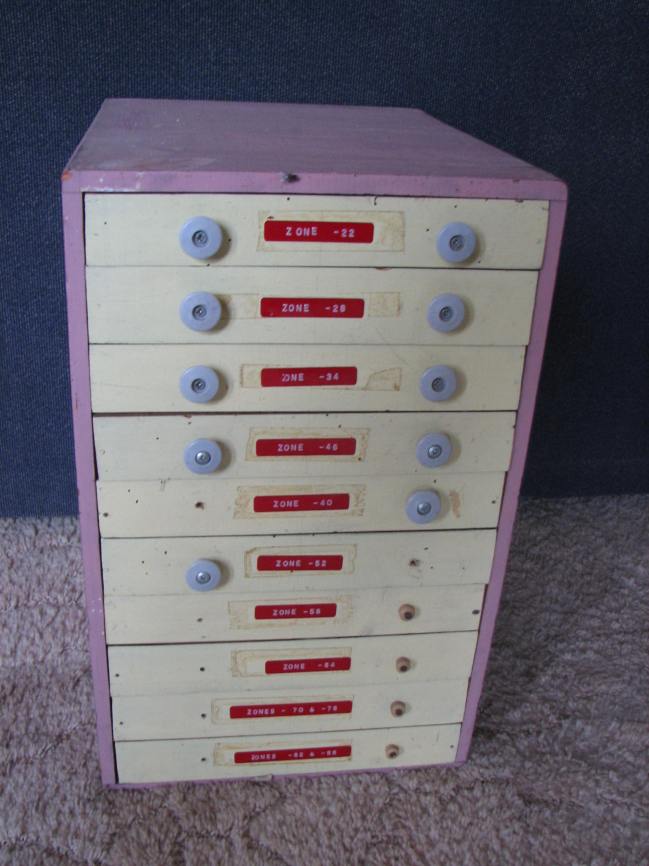 We have been here 7 years and have always despaired of the pantry. Much of it is hidden behind the wall, it’s never been finished (the house is 40 years old!) and is full of wasted space. 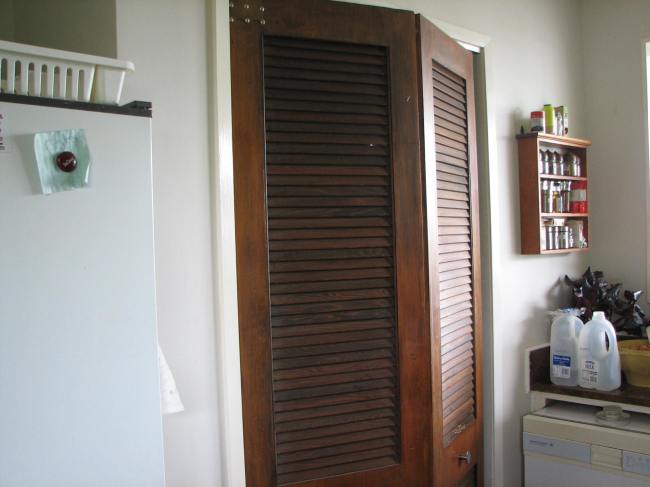 In fact it’s the ugliest pantry you will ever see 🙂 and there is little other storage in the kitchen. These brackets in front were very quickly put up after the first earthquake when everything felt out – they are not normal pantry fittings I know 🙂 They have not come down because we still get the occasional one 6 months later. You see my problem here though ay!? I would like something nice and something functional. Roger is going to be taking this front wall down and building all new shelving, which IS a bit concerning because I get to view his unfinished projects every time I go into the garden. He assures me though that he does realise the importance of a job done quickly, and done in it’s entirety, when in the kitchen. 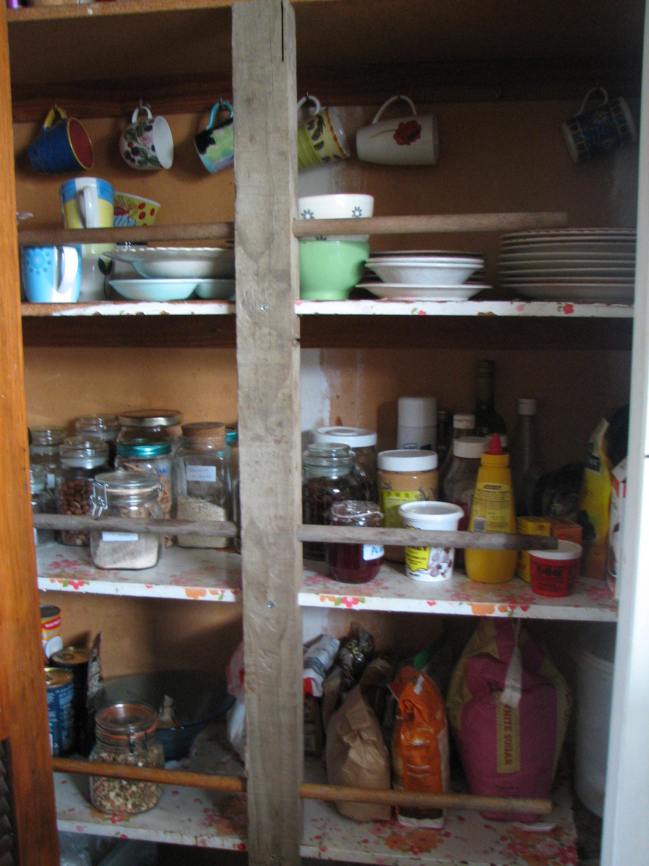 I cannot believe I have just shown the whole world my crappy pantry! The door normally stays firmly shut 🙂 🙂

But I will be so happy to see it gone and something workable in it’s place. That dishwasher does not go (top photo) and will be gotten rid of to use the space. Much as I would’ve liked another it’s not going to happen, they use too much power.

Regular readers know of my / our love of second hand and thrift shopping, we never buy new. After a long period of making do or going without we decided to go in to a car boot sale which is a regular Saturday morning event in town…..to treat ourselves our version of retail therapy 🙂 And we needed vegetable plants, this is the cheapest way to buy them. While Roger is far more likely to buy things that we are needing I tend to be rather more emotive in my buying – I like old or interesting things we don’t need. He comes home with useful bits and pieces, I often just come home with cheap but exciting “treasures” I can’t wait to put up somewhere.

This is what we got for $53, along with vegetable plants, coffees and a couple of hours entertainment poking around,  wandering in the sunshine listening to lots of good music and chatting to lots of people we knew. I also saw a very elderly couple drive right through someones stall then attempt to back back through it, turn around in a confined space right next to me and park to go and help clean up….they reminded me somewhat of Mr Magoo lol.

A 1970’s velvet patchwork look-a-like double bedspread. I stared at this for ages wondering whether I could justify the $15 and decided I couldn’t leave it for someone else when I just loved it. 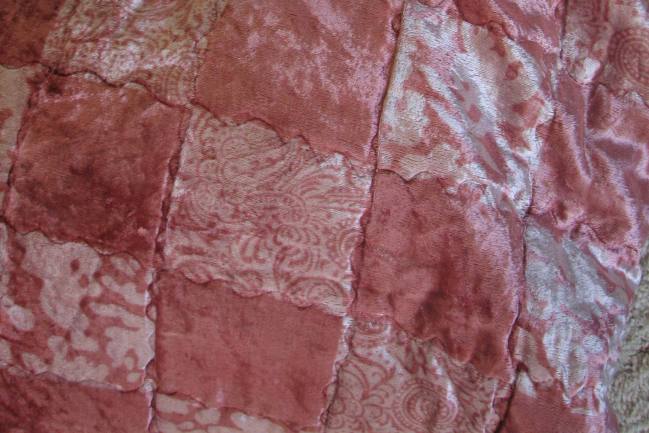 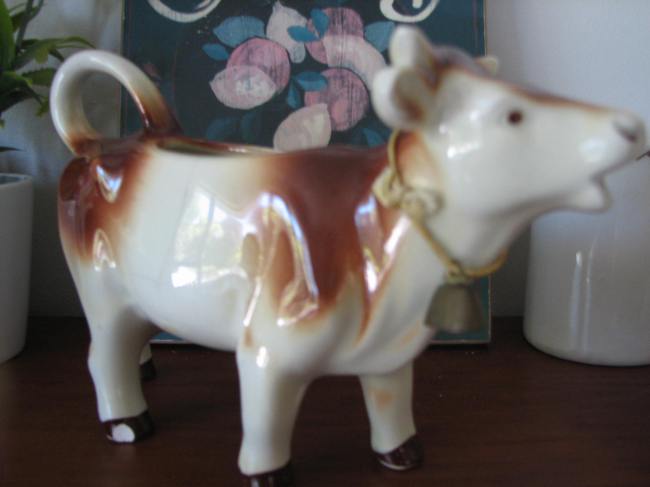 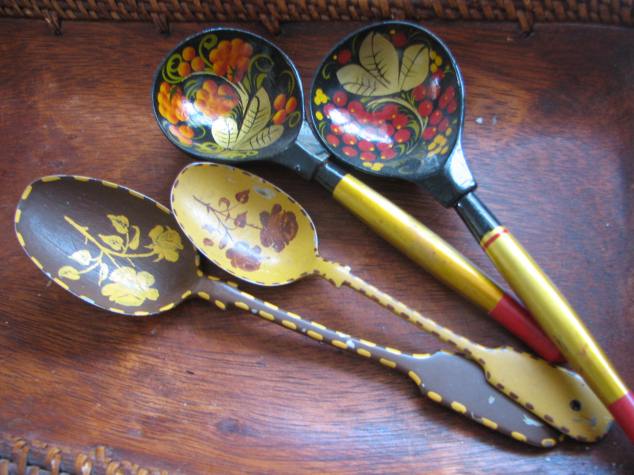 3 oven dishes to replace some broken ones, $11 for all 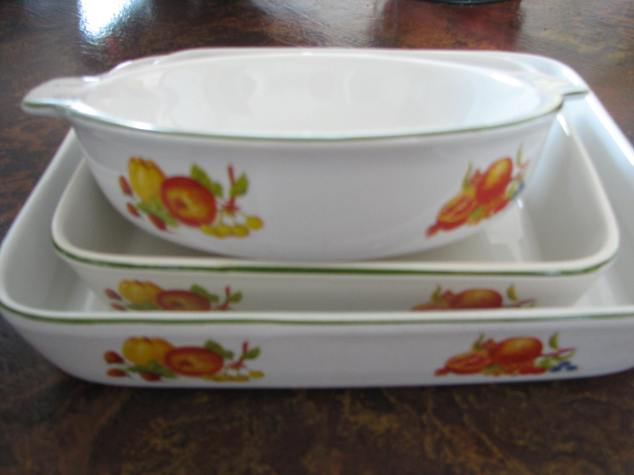 A framed dry flower picture, not perfect but done by someone with care $6 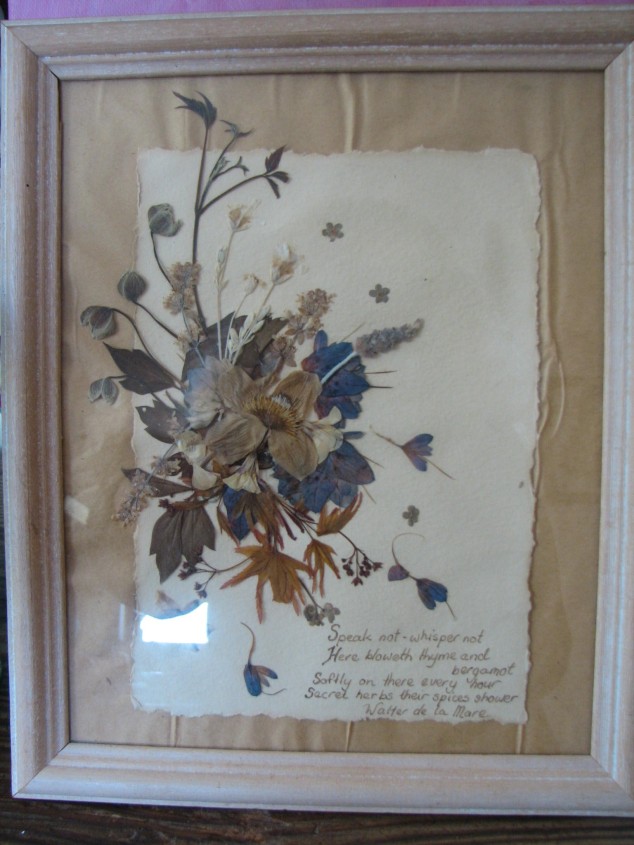 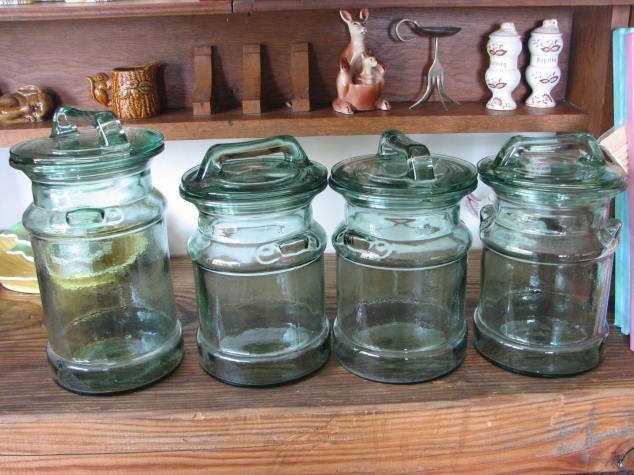 A $5 beanbag for Bob which has never been used, I think he likes it 🙂 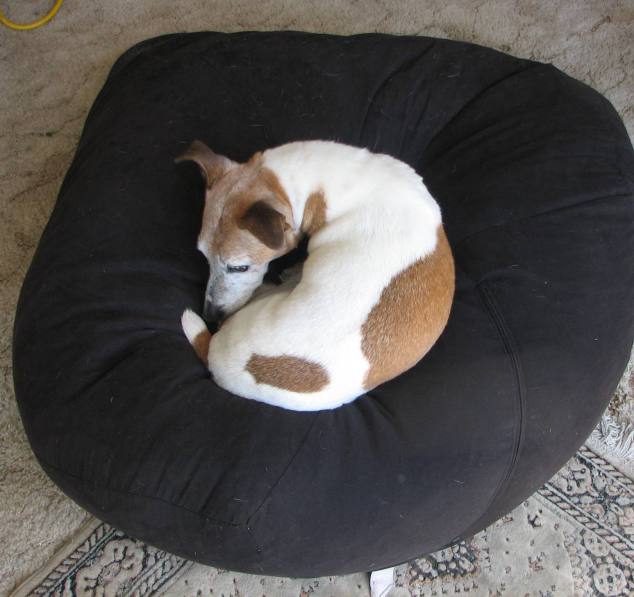 A pluggy thing? for the workshop and another sprinkler for the garden, $1 each 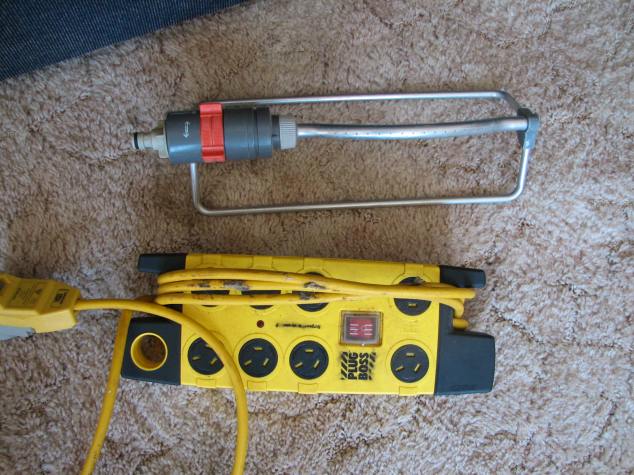 These sprinklers are $30 new at least, we have 4 which we only paid $1 or $2 and all were barely used. I know many people who wouldn’t dream of buying secondhand stuff but this sort of buying suits us just fine. We can get old and charming, original stuff no one else will have and we can buy what we need on a low budget without stressing over how much it cost.

No secret we are secondhand shoppers only. Everything we own is recycled from free or secondhand. Myself and another blogger were just saying a couple of weeks ago how everything you need turns up somehow if you are prepared to wait. Rather than impulse buying at malls we just have a list of items we need…and we need to buy them as cheaply as possible because we have little spare money. My husband takes a trip to town every Saturday morning and spends the week searching under $1 auctions on our most popular auction site, he’ll bid on things we need and hope to get stuff for $1-$2 so he combines collecting his treasures with dropping in at odd garage sales. I don’t generally go with him – he leaves at 7.30 am while I am still sitting in a zombie state trying to wake up, it’s winter here and outdoor shopping doesn’t appeal at present, he spends hours looking at tools and other very exciting junk which is actually very boring for his other half and he probably enjoys having me tag along as much as I love having him underwear shopping with me….rolling eyes and lots of sighing!! These are his latest purchases.

Electric jug $2 – Two years ago we were bought a jug as a gift. It cost $89 on special and I know this because it broke down 2 weeks later and we had to return and exchange for another. Two weeks ago this expensive jug started leaking. Roger picked this one up this week at a garage sale. 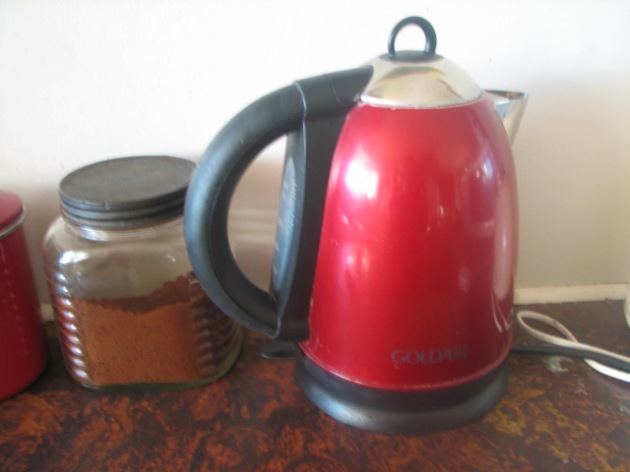 Cast Iron Frying pans $15: Normally he wouldn’t spend this much but these have been wanted for a long time. The large one is the same as one he dropped and broke the handle off last year….which wouldn’t have mattered too much but it took a big chip out of the side. These are hard to find and usually much dearer than this. 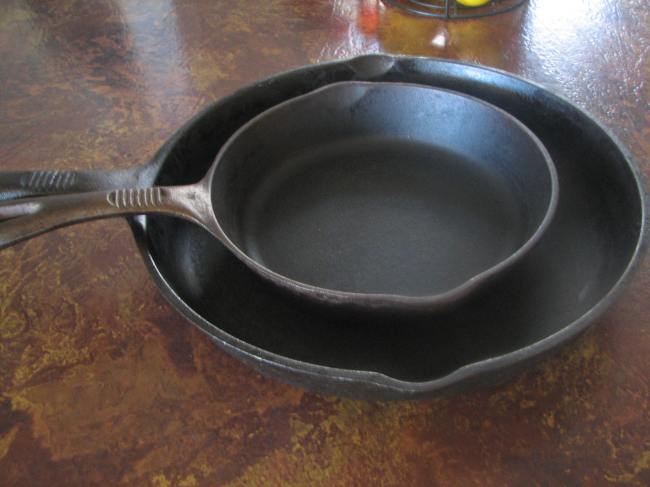 280 bricks $1: He bid on these and no one else did. We wanted something to make a path through a muddy part of the garden. 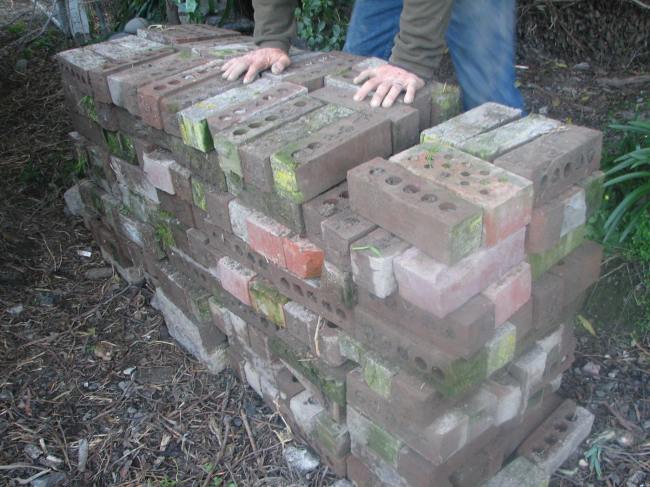 Last week he had bought something else from these people and got talking to them on Saturday. They owned a free range chicken farm but were getting rid of everything to try something else, the recession had hurt them. They had 1000 chooks they were selling cheap so Roger bought 3 red shavers for $10. He was then GIVEN 2 automatic water feeders (something we were wanting) and a aluminium sliding window to add to his new collection of recycled windows for another glasshouse. 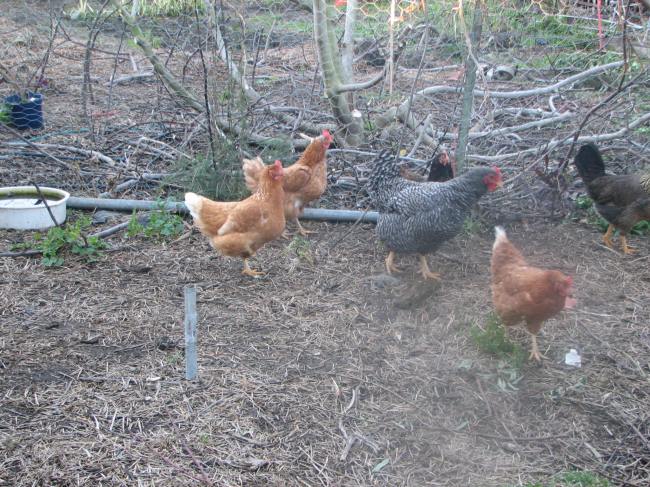 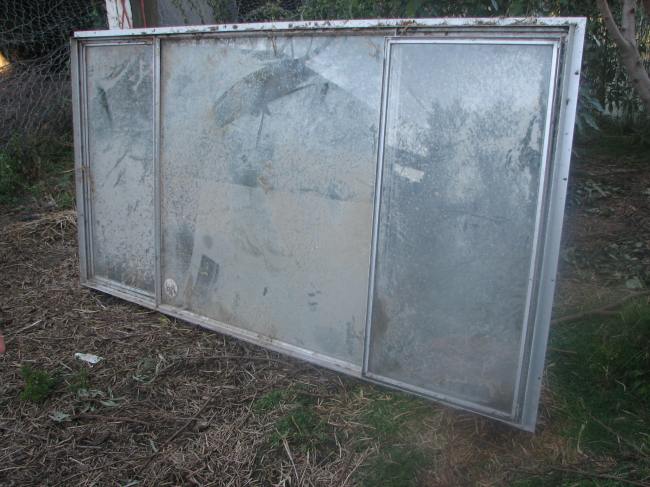 25 kg bag of animal food nuggets $1: People had bought them for their sheep but they didn’t like them, it only had a little taken out of and Roger got it for pig feed.

So all this cost him $29 and the women with the chickens asked him if he was needing any chicken wire (and yes we do!) and on Sunday he is going to help them take a whole lot down and he can take it away. Roger would never ask for anything (except from mates if they were throwing stuff out) but he stops and yaks to people and comes home with all sorts. (I have grave fears for the state of our property as all sorts appear in ever growing heaps waiting to be tidied and stored somewhere out of eyesight!!)

So, me… I did the housework and some baking, planted mustard and cress in containers…actually the old trays of an old discarded beehive I found out in the wops. This is how they look this morning after a neighbouring cat used it! 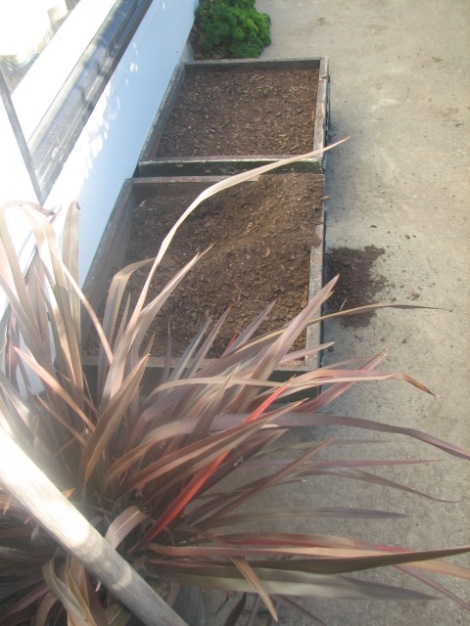 I went to my granddaughters birthday party an hour and a half’s drive away. This is what I drew for her in my quiet times over the weekend. I send her a picture every week. 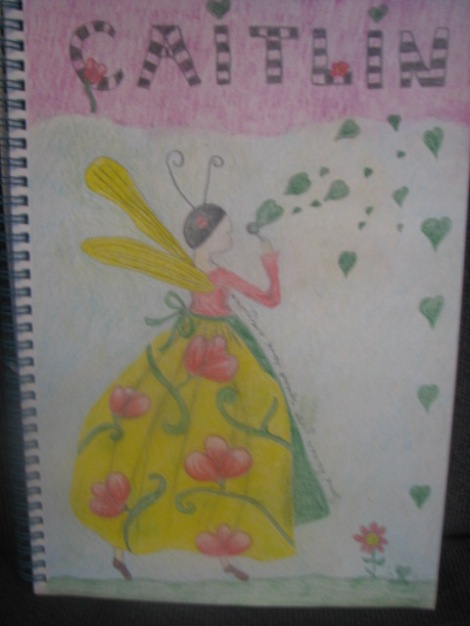 Now, these are the 3 dogs we have at present, the grey one is my son’s whose holidaying with us at present. This is what happens whenever you sit down to eat. 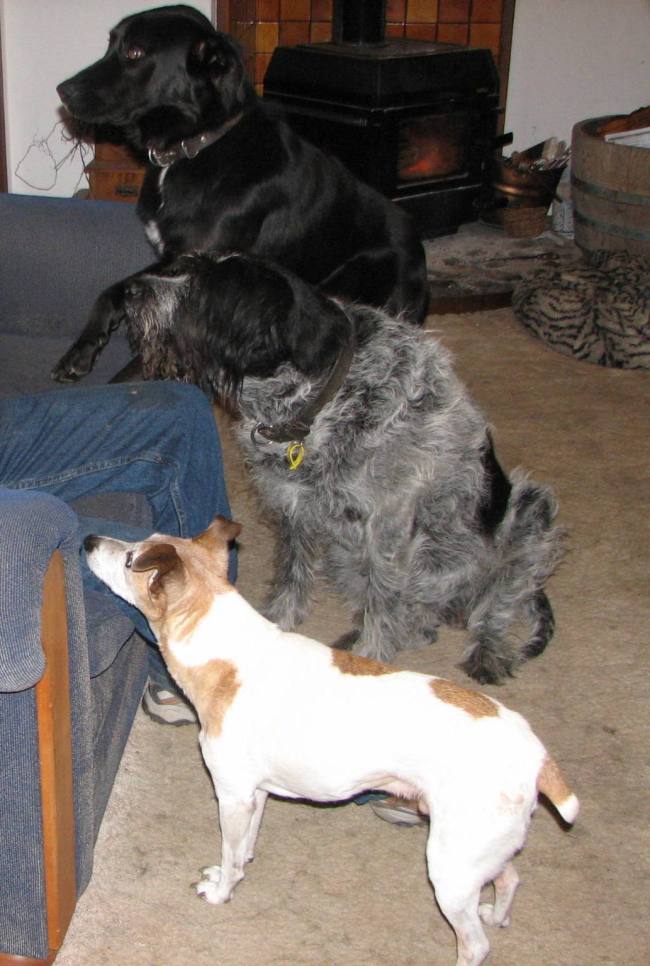 This is Bob. Bob is 18 years old and this is his beanbag bed. He loves it, it’s like his “blankie”. 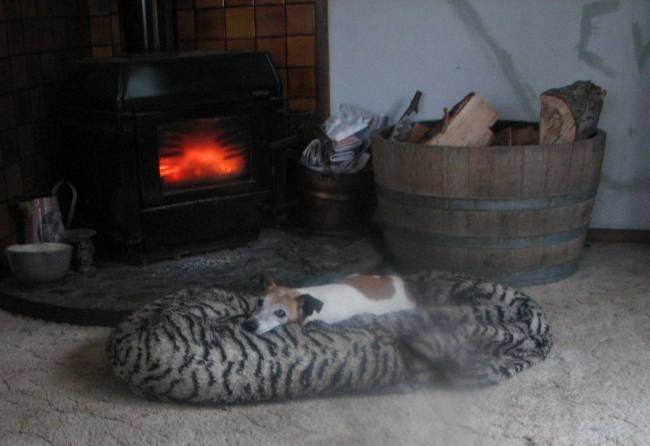 This is what can happen when you go and help your husband unload 280 bricks off the back of a truck and try and secure your chickens back into their run, AND you leave 2 big dogs inside with a beanbag (because they chase chickens). 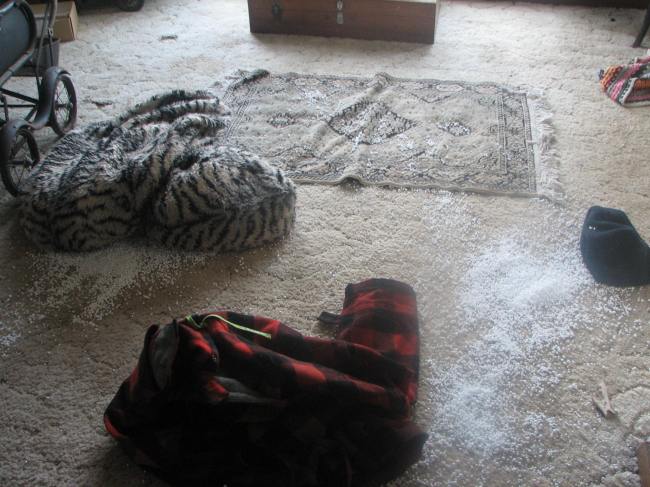 So this is how I spent yesterday evening, mending a beanbag with Bob sitting waiting patiently, on the beanbag, on the sofa. 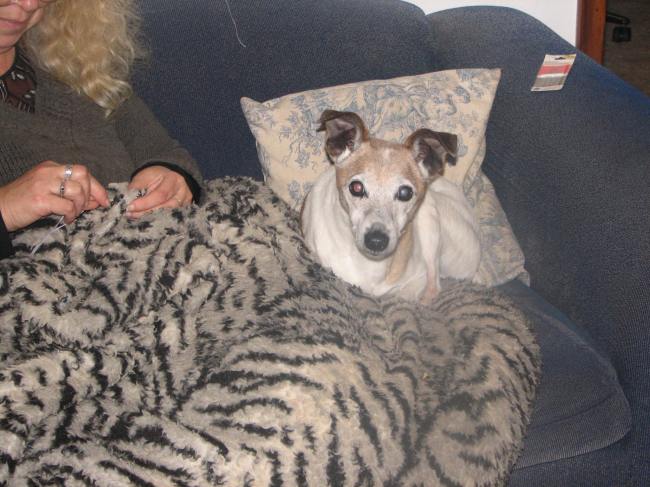 I love this blog by non-supermarket as she explores local food.